By michaelamclellan on Thursday, February 6, 2020 It’s been a tough go this time but I’m finally putting the finishing touches on the new book, tentatively titled Return Addresses.

There is nothing on Earth as simultaneously fragile and resilient as a child. The statement sums up the book more thoroughly than any synopsis ever could.

A victim of the very system that was supposed to protect him, fourteen-year-old Sean Pennington finds himself on the run, a castaway among America’s faceless and forgotten. Robbed of all his possessions by street thugs, Sean finds an unlikely friend in a California homeless encampment; Andrea, a modern day hobo who travels the country by rail. Andrea promises to help Sean locate his only living relative, but can she protect him from the unpredictable and often violent world she lives in? Book Reviews: In the Shadow of the Hanging Tree 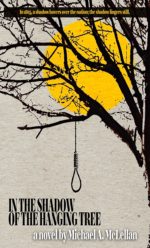 In the Shadow of the Hanging Tree and other novels by Michael A. McLellan are available at Amazon, Barnes and Noble, and Most Book Retailers

Goodreads reviews for In the Shadow of the Hanging Tree